With buzzing synths, a stomping post-disco beat and bratty, commanding vocals, “Kate” by Chandra is a New Wave classic. The song has an arty detachment that effortlessly evokes the grimy cool of downtown New York in the early 80s. Even more remarkable is the fact that the authoritative performance of lead vocalist Chandra Oppenheim was recorded when she was only twelve years old. 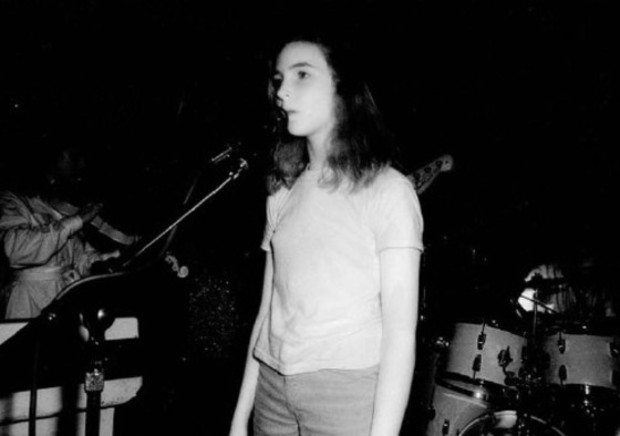 As the daughter of conceptual artist Dennis Oppenheim, Chadra’s art world pedigree allowed her to enter a scene famous for its brainy decadence. He connected her with Steven Alexander and Eugenie Diserio of the mutant disco act The Dance, who gave Chandra’s precocious poetry a skronky post-punk beat. Together as Chandra (the band), they played now mythical downtown haunts like Danceteria and Mudd Club, toured the country and recorded one four song EP, Transportation, before calling it quits.

Hard as it may be to imagine a twelve year old fronting a post-punk band at clubs frequented by luminaries like Jean Michel Baquiat, Lydia Lunch, and Jim Jarmusch, Chandra upped the ante after the band’s break-up by forming a short lived all teen act called The Chandra Dimension. With Alexander and Diserio acting as producers, they recorded one self-titled EP that remained unreleased until Cantor Records released it in 2009. They played the same clubs and dives as before, but ultimately Oppenheim decided that school should come before her burgeoning music career:

It got shelved because the band was fizzling out and my interests were changing. I remember school being rough and I would bring my homework to band practice. So it ended up being a conflict, so it was over before it was released.

While the music is definitely an artifact of the vibrant New York post-punk scene, her lyrics are unironic reflections on pre-teen experience, all delivered with an immediacy that walks a fine line between adult knowingness and childlike naiveté. In an interview with Fader, Chandra opened up about her creative process behind writing “Kate”:

It was an outlet for me to express stuff, difficult stuff that I was going through. So with “Kate”, I’m talking about a girl who I actually did go to school with and I knew she was going to hear the song and then I put her picture on the back of the record with me. The song is about being jealous of her so I was just saying “Well, I’m jealous of you and um, you know, I like you, I just wish I were more like you,” you know.

While Transportation and The Chandra Dimension EPs are currently out of print, “Kate” can be heard in the soundtrack to Teenage along with sixteen original instrumental pieces from Bradford Cox. Available now on iTunes.

Hear it in the context of Teenage on March 14th at Sunshine Cinema.