Famous for fasting, Mollie Fancher led a Victorian girls life of sickness and fragility. In 1865 Mollie was in an unfortunate streetcar accident that left her bedridden for 9 years. During that time she exhibited bizarre behaviors—blindness, spasms, and frequent trances. Then one day Mollie woke up and was perfectly healthy. She claimed to have clairvoyant powers, reading peoples minds, seeing through walls, and the ability to survive without food. The public ate this story up, and Mollie became a celebrity for not as much being clairvoyant, but for existing without food. Brooklyn based Mollie Fancher became known as the ‘Brooklyn Enigma.’ 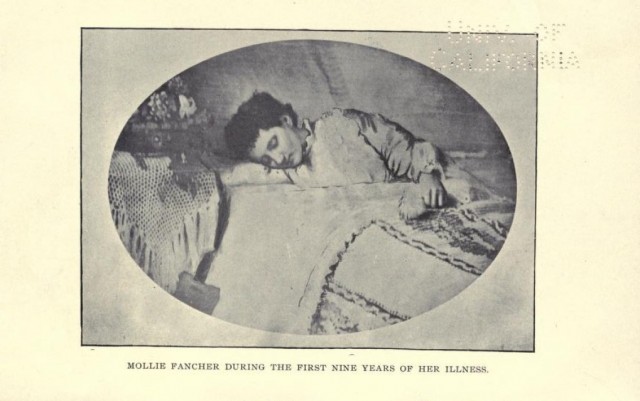 Fasting girls is a Victorian term for young females, usually pre-adolescent, who, it was claimed, were capable of surviving over indefinitely long periods of time without consuming any food or other nourishment. Fasting girls were not only girls who refused food but who also drew attention to their fast by claiming to have special religious and/or magical powers.