I have a vivid memory of lying in the sun during summer 1970—when I was 16/17—listening to Traffic’s John Barleycorn Must Die and reading Mervyn Peake’s Gormenghast trilogy. The previous summer I’d read through Lord of the Rings (and I’d like retrospectively to thank my parents for buying me these books). The Gormenghast trilogy remains one of my favourite books: I love the language, the pace, the sense of a hermetically sealed world and the slow but deliberate ratcheting of menace until the explosion of violence.

Peake’s illustrations—in the Penguin edition that I read—capture the mood perfectly: in particular, Steerpike – the young, fanatical revolutionary – IS Johnny Rotten before the event. These were read by the way, alongside pop mags like Zigzag and Sounds. The next year I switched to 20’s/ 30’s American and British modernism: Sinclair Lewis’ Babbitt, Aldous Huxley’s Eyeless in Gaza, and Cyril Connolly’s The Rock Pool. Then pop histories like Colin MacInnes’ Absolute Beginners. All these books could be found very cheap in second hand shops, and became part of an early seventies aesthetic (see the Pet Shop Boys: “Being Boring“). 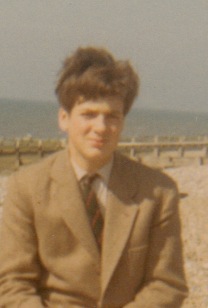 — Jon Savage is a writer living in Anglesey, Wales. TEENAGE film is based on his book, Teenage: The Creation of Youth 1845-1945. The photo above is Jon Savage in 1968.