I was recently at a tribute concert for the incredible Kathleen Hanna and my friends and I flipped out over Care Bears on Fire. Above is a video of their cover of Le Tigre’s “My Metrocard.” Do you notice the insanely talented drummer Izzy Schappell-Spillman performing her heart out? It turns out she’s also brilliant. Here are some of her thoughts on Riot Grrrl, Rory Gilmore, and teenagers today…

MATT WOLF: How old are you, and when did you get into drumming?

IZZY SCHAPPELL-SPILLMAN: I’m 15-years-old and I began drumming when I was 8-years-old at Rock ‘n’ Roll Camp for Girls in Portland, Oregon. Prior to the drums I had brief flirtations with the guitar and piano, but they were not loud or exciting enough to satisfy me, so I went to camp with absolutely no prior drumming experience and fell in love.

MATT: Well you’ve got the gift! Tell me about Care Bears on Fire. How did you start the band and what kind of music do you guys play?

IZZY: My friends and I started Care Bears on Fire when we were 9-years-old, and back then “practice” primarily consisted of eating candy and throwing stuff at each other. But with time, we learned to play our instruments, evolved into our current line up, fell in love with 1970s punk rock and Riot Grrl. We write our own songs, so our music changes as we get older and are inspired by different things. Currently we are very influenced by high school, living in New York City, the 90s, street style fashion, kittens, Sleater Kinney, Kathleen Hanna, and our huge crushes on Joey Ramone. 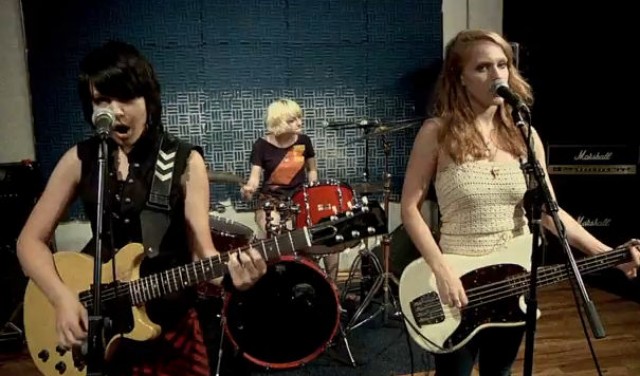 MATT: Are you inspired by Riot Grrrl?  How did you learn about it, and why is it important?

IZZY: Riot Grrrl means so much to me. I first learned about Riot Grrrl through my friend telling me to check out this song called “Rebel Girl,” so I did and had never before felt that all my anger and excitement could be channeled into one song. So I did some investigation and found more bands, zines, and finally the Riot Grrrl Manifesto, which I immediately copied into my journal. I had always felt that the media was always finding something wrong with me, too fat, too loud, too weird, and finally there was a movement and art forms rejecting all the hate and embracing being a girl and turning all my feelings into powerful music. Riot Grrrl is so important for girls and boys of today to know about because we don’t live in a world where everyone feels safe and empowered to walk down the street as who they are. Everyone has the right to find a community in which they feel accepted and loved and Riot Grrrl did that for me.

MATT: Amazing and right on. You’re totally contributing to that legacy. Do you know many other teenage drummers? How do you find out about your favorite music?

IZZY: As I get older, more and more of my friends become musicians. My drummer friends and I like to hang out and talk about new grooves we’re working on and share tips. My parents have amazing taste so they share a lot of music with me. I grew up listening to a lot of Sonic Youth and Pavement. My Dad definitely knows more about current music than I do; he introduced me to Vivian Girls who are one of my favorite contemporary bands. My Mom has given me an education in powerful female musicians, from Nina Simone to Joan Jett. I also learn about new music from magazines like Venus Zine, Bust, Q, and Pitchfork. My friends also tell me about rad bands. My bandmates are just about the coolest ladies ever and are always telling me about new music.

IZZY: My favorite book right now is “The Virgin Suicides” by Jeffrey Eugenides and my favorite movie right now is Empire Records. I watch it every few weeks and dance around to the Gin Blossoms and wish there were cool record stores for me and my friends to hang out in.

MATT: Do you have a favorite teenager from the past?

IZZY: There are so many teenagers I admire. When I was younger the ideal teenager was Molly Ringwald, in every movie, she was sweet, unique, well dressed and always got the coolest guys who respected her individuality. It was a sad day when I realized my life could not be a John Hughes movie. As I entered teenagerhood I was drawn to Holden Caulfield from Catcher in the Rye. His attitude towards society and internal monologues totally fascinated me and I totally fell in love with him.  At this time I also discovered Rory Gilmore (pictured below) from Gilmore Girls and to this day I think “What Would Rory Do” all the time. To me she represents the perfect teenager as she doesn’t let her adolescence get the best of her, she loves her mom, dates nice guys, then gets into a great college and has witty references and perfect hair.    My current favorite teenagers are Buffy the Vampire Slayer, Angela Chase, and Andrea Marr. Buffy the Vampire Slayer is so cool—she is able to balance so many parts of her life, she has great friends, goes to high school, and kills vampires. So when I get freaked out about balancing homework and being in a band, I think about Buffy and her amazing time-management skills. Angela Chase, from My So-Called Life, is self-aware and confronts so many of the difficult and scary experiences of growing up in entirely realistic ways. Andrea Marr, the fictional heroine of Blake Nelson’s book Girl is everything I want to be: funny, smart, and weird. She represents the ideal cool teenager who loves music and shopping at thrift shops. 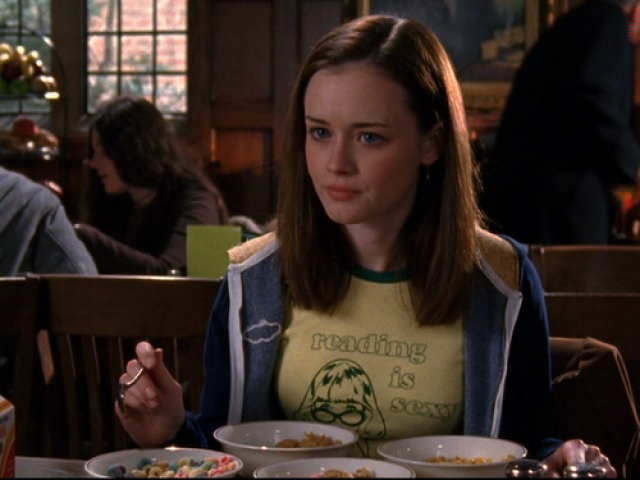 MATT: What’s lame and what’s awesome about being a teenager today?

IZZY: Being a teenager can be a wonderful experience. However, it is often painfully awkward and full of kisses with braces, gym class humiliations, and ill-fated style choices, in my case American apparel leg warmers and gauchos. Yet there have always been pimples and raging hormones, so what differentiates this generation of teenagers, what makes us special, what do we have to say that’s different, what space are we occupying in the culture? To me, this generation has harnessed and is now reaping the benefits of a 21st century marvel, the Internet. Today’s teenagers can reject the prepackaged stereotype-enforcing junk that major labels and Hollywood are cramming down our throats in favor of creating our own art, music, and movies that speak to us, and we are doing this through the Internet. No matter where one lives or their interests, the Internet can connect them with someone or thousands of people who share their passion. The Internet brings some teenagers fame… On one end of the spectrum is the rise of the empty, neutered vessel that is Justin Bieber, and on the other end reigns the truly unique, smart, high princess of internet cool Tavi.

Ironically the Internet has killed one of the most fundamental elements of being a teenager, the ability to completely change one’s identity. Being a teenager is about figuring out what you like, what you are good at, who you are attracted too and so on, yet when everything is recorded and saved forever it is harder to change once you are locked into an online identity.

Check out one of Care Bears on Fire’s songs: