In Bed with Chris Needham is a glorious video diary of England’s most likeable teenage Thrash Metal head—Chris Needham. The documentary follows Chris and his band, Manslaughter as they prepare for their first gig—featuring a bare chested Chris, in a guttural performance of the original tune, Don’t Want To Save The World.

Curious and dedicated fan Left Lion, tracks down Chris Needham at home in Loughborough where he conducts an in depth, follow up interview. Here’s an excerpt from the extensive interview…

One of your most famous quotes in the documentary was when you said that Youth was a damned culture. So what do you think about the youth of today?
They’re enjoying themselves, having a good time…that’s all that matters, isn’t it?
…

Documentaries trap you in amber, don’t they? People want you to be the same person…
You’re right. But that’s the wonder of the magic eye in the corner of the living room. You’re etched in celluloid – for want of a better word, because it doesn’t exist anymore – for the rest of your life. That’s what the media does. It compartmentalises you. You are there, that is you, that’s what people perceive of you. We judge people by what we know of them, even when they get a one-dimensional image.
So why do people get so obsessive about the diary?
Because it taps into a universal truth – living the American Dream, but in England. It’s the idea of forming a band and doing the show right here, and believing in and eulogising the flame of Rock n’ Roll and Metal. I mean every teenage boy either wanted to be a Rock star or a footballer. You didn’t say you wanted to be a chartered accountant when you were 17. And it’s about growing up; we were all teenagers who were a pain in the arse and thought they had all the answers to the world, and in reality you know next to jack shit. And people connect with that, and laugh at it as well. And the story just tells itself; a teenage kid who wants to start a Rock band and what’s going on in his life. It’s got this veneer of Teen Hollywood movies – remember that I did it before Wayne’s World. There’s also bits of Spinal Tap and Bad News in there as well. Manslaughter used to play Warriors Of Genghis Khan, actually. 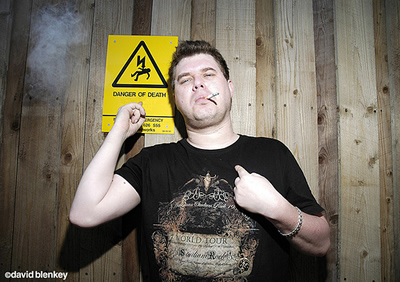 Thanks to Anna Peaker introducing us to In Bed with Chris Needham.
Thanks to Kate Jinx for sending the follow up interview!