“Crew [of teen gang members] is shown in jiffy wagon as they were transported to Adolescent Court.” Brooklyn Eagle, June 4, 1953

Get the look: bad boys of Brooklyn. The Hawks, the Saints, the Socialistic Gents lived a hard, fast life dealing dope, wielding weapons, and dodging the fuzz. They were tough, and they dressed even tougher—thick leather boots, paired with cuffed dungarees, held up with a giant brass belt buckle and buttoned, collared shirt; a cropped leather jacket made for easy back pocket access to a switchblade or comb. The smoother criminal chose an extra large suit jacket and dress shirt worn with baggy, pleated slacks and shiny black shoes. An overly sized overcoat made for clever concealment of weapons and stolen goods. Some boys wore their hair thick and slicked back, others sported a nifty newsboy or bowler hat. 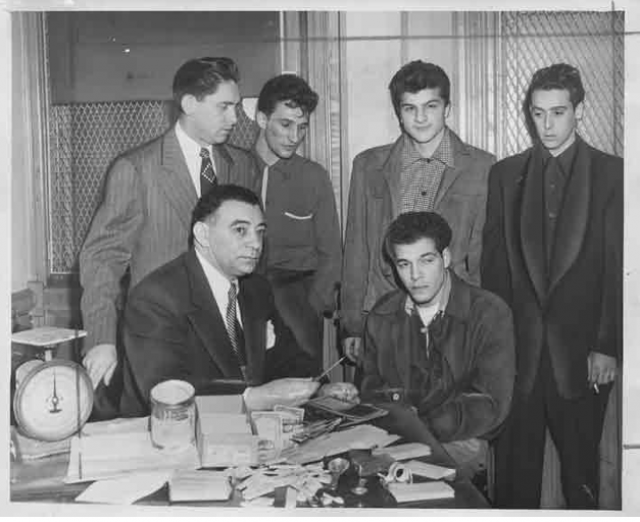 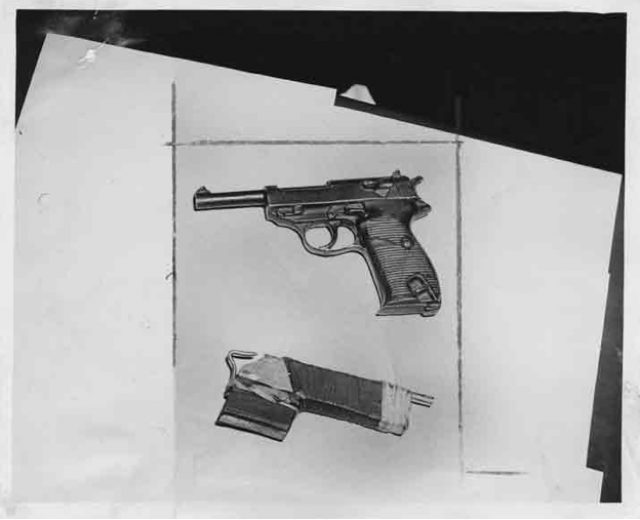 “Makeshift weapons like these are used in many instances by teenage criminals. The ‘gun’ shown on top is an imitation that can be bought by mail at a cost of one dollar. Pictured below is a ‘homemade’ pistol taken from a juvenile delinquent. What looks like the hammer is really a door hook.” Brooklyn Eagle, Apr. 29, 1948 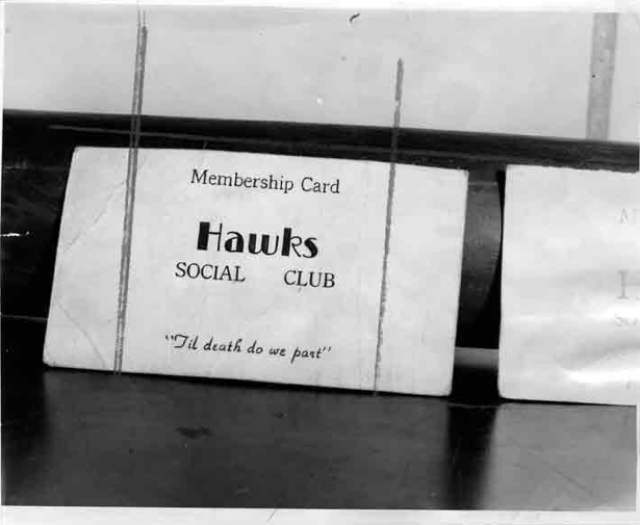 “Dog tag–Rounded up ‘warriors’ of teenage Hawks gang carried membership cards bearing at bottom the motto, ‘Til death do we part.’ It may be ungrammatical, but police said the sentiment is “all too real.” Brooklyn Eagle, Mar. 11, 1954 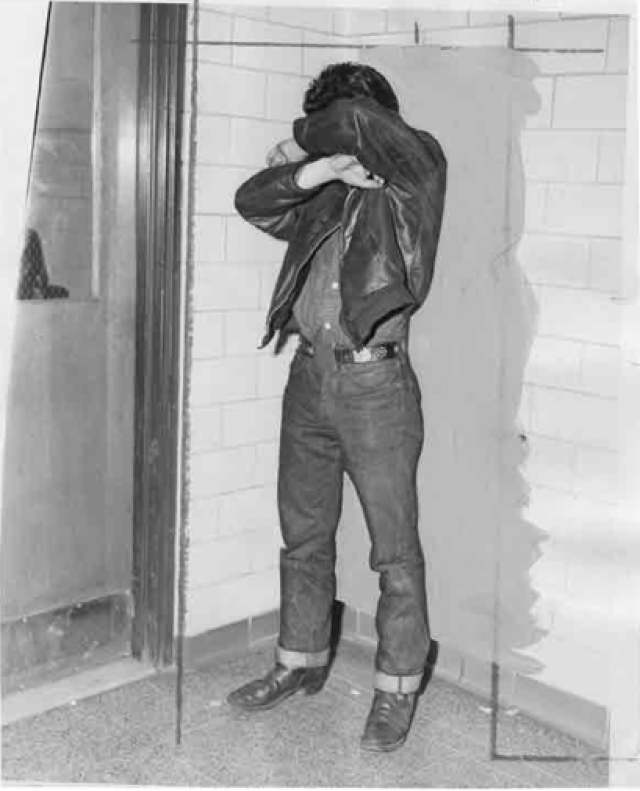 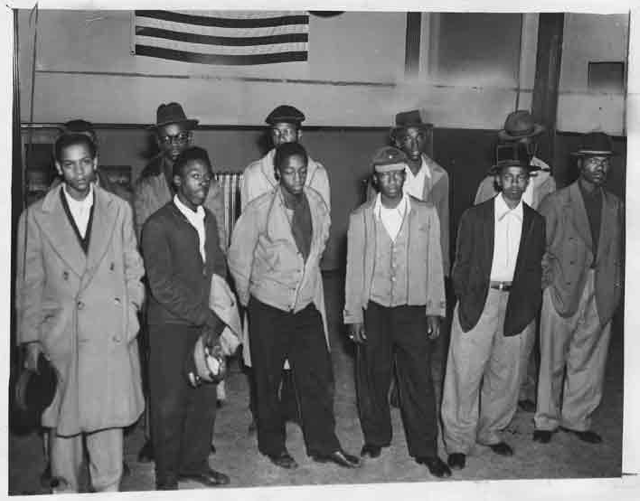 “Seized in gang war–These [eleven African American] teenagers were among 18 youths booked at the Liberty Ave. precinct after a gang feud broke out in Brownsville. Three were wounded and there was a street free-for-all in the warfare between the ‘Saints’ and the ‘Socialistic Gents.’ Brooklyn Eagle, Nov. 1, 1949 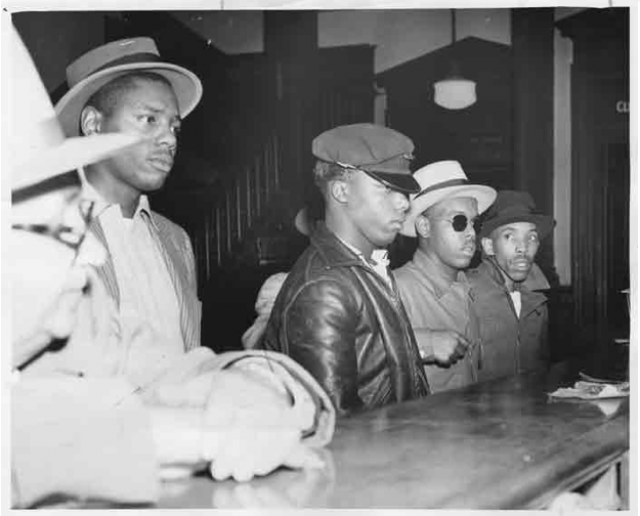 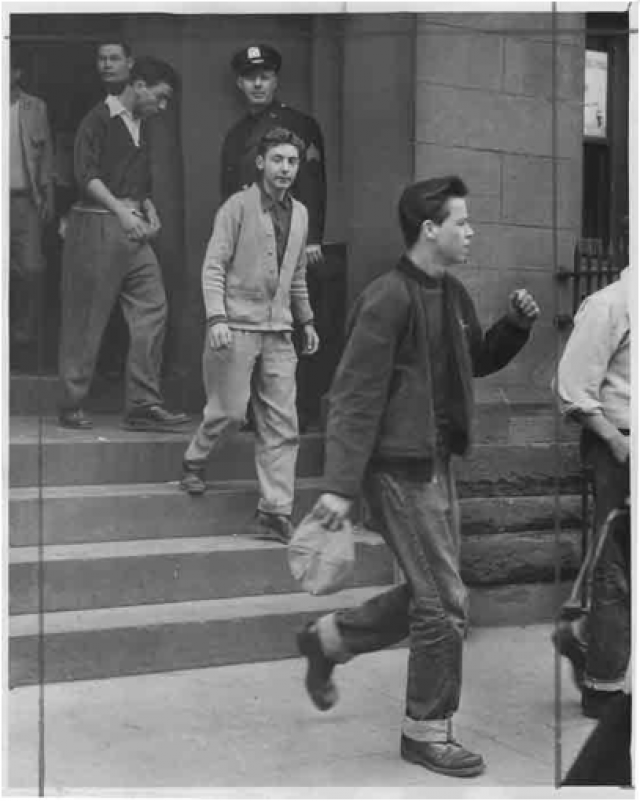 “Gang war nipped–File of teen gang members leaves Classon Ave. station house after being rounded up by police as they moved into battle in Fort Greene Park.” Brooklyn Eagle, June 4, 1953 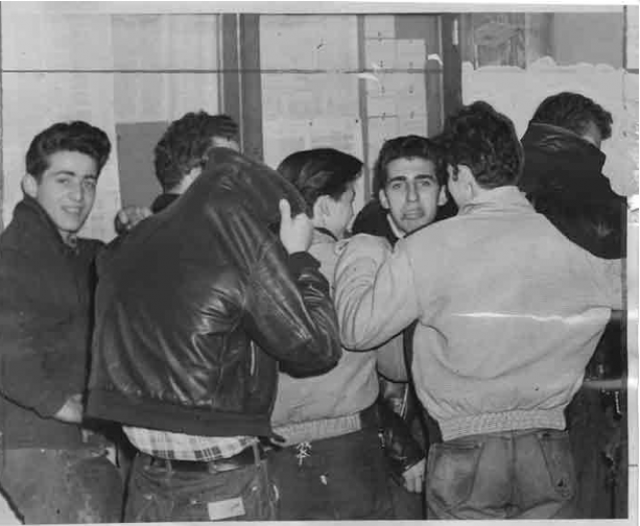 “Warriors nabbed in roundup–Some of Borough Park teenagers seized by cops cover up in station house while others laugh and one, right center, gives photographer a ‘Bronx cheer.'” Brooklyn Eagle, Mar. 11, 1954

inspired by Brooklynology – Rumble on the Docks
Thanks for the tip, Mary Speaker!
images via Brooklyn Public Library