It was the summer of 1997. I was a thick, telephone pole of a 14-year-old in jorts and an oversize Far Side t-shirt, sitting on a clammy folding chair. After much wheedling, I’d finally sold my parents on the benefits of the information age. As I inserted that first AOL CD into our computer (“First 20 hours free!”), listening for the hisses and skips of recognition, my stomach churned, my mouth dry. A vaguely seductive male voice intoned the magic words, the salve to my nerdly wounds: “Welcome. You’ve got mail.”

I recollect my teen years with a mixture of confusion and shame. For a long time I willed myself to believe that I entered college fully hatched — all clove cigarettes, Anais Nin, Nina Simone and cat eye glasses — glossing over the pungent memories of wide (really wide) JNCO’s, infected nose piercings, loneliness, pretension and asshole boyfriends (who graced me with such classic one-liners as “You taste like milk; go brush your teeth.”) I was a recent transplant to my small Iowa town (from an even smaller Iowa hamlet before it), and I convinced myself that everyone at my school hated me as much as I despised them.

The truth is that I was kind of a loser — not a meth head or an oversized Pooh or Taz t-shirt wearing mouth-breather, as was common in those days; I was a more complex casserole of overenthusiastic nerd with an itch to be acknowledged, crossed with a sheltered, weird kid who always had a hole in the crotch of her sweatpants and checked out 30 books at a time from the library. Mix Tracy Flick (minus the political aspirations) with Dawn Weiner, and you’ll start to get the picture.

In a dichotomy of blond athletes in Starter jackets (the ultimate status symbol) and farm boys dirt racing in the school parking lot, I was lost: a blank slate. The only thing I really knew for certain was that this “internet” thing held a lot of power. This was in the early days of chat rooms and IM, and I was soon an addict, abusing our dial-up and lurking to my heart’s content. While held in the (relatively) safe bosom of AOL, there were no preconceived notions about being a brown noser, socially inept, fat, tall, weird or “the new girl.” I was only Zubon13. I could be anyone. I could be anything.

My newfound internet confidence led to some questionable identity experimentation. One classic instance: After taking up low cut shirts and JNCO’s, an afternoon AOL chat session turned into “driving the lap” with the gang of aggressively eye-linered foster care girls who had previously spit in my lunch. As we drove in circles, the thumping bass of Tupac’s “California Love” shaking the car, I tried to enjoy Erica’s secondhand smoke as it drifted through my open window. Ultimately, I could not compete with their stories of abortions, shoplifting, parole officers and abusive moms with hammers. (I can honestly say I’ve never felt more white bread in my life.)

As the years went by, every wardrobe change became a desperate attempt to outwardly express just how alternative I was that year, and just how not like my peers I considered myself to be. My closet was like a revolving door of identities. After my techno, hippie shirts and hardcore rap phases (aided by the early days of hacker chat rooms), I took inspiration from FRUITS and became a thrift store junkie, haunting the 10-for-a-dollar days at Salvation Army. It didn’t matter if the clothes matched or even fit; I would change my clothes multiple times in a day, if only to get a reaction. Waitress uniform, two sizes too small, would be followed by fur coat-over-polyester-pantsuit, then finish out the day with old man pants and a tie dye t-shirt. My body screamed, “I dare you to look away.”

I knew there were people out there somewhere who thought like I did, felt like I did: the internet had convinced me of that fact. In a sea of small town aspirations, seeking only to work at a local insurance agency and marry someone else in town, I knew that my people were out there somewhere, sitting in stifling purgatories of their own, counting the seconds until they could escape. And so I’d stand in front of the mirror, awkwardly dancing to my skipping Thriller record, and mouth my mantra to the cooing voice of MJ: “I’m going to college. Oh-fuck-yes, I’m going to college.” The sound of “PYT” still gives me goosebumps when I think about it.

And my tribe? I found it. It’s right here. 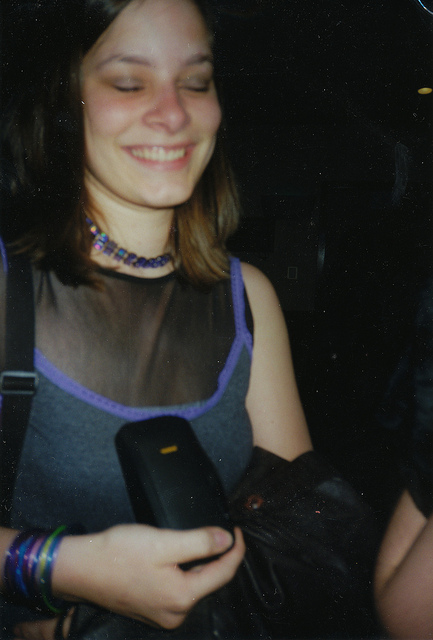 —Alison Feldmann is a writer, blogger (http://TeenAngster.net) and cat obsessor living in Brooklyn, New York. She no longer tastes like milk.